Conservative restoration of the facades

Due to its dimension, complexity and historical importance, the restoration work of the Church facades has required the synergy of important companies specialized in different techniques of restoration. Progetto Arte Poli, Seres Restauri and Tisato Massimo Restauri are working together to restore the original appearance of the facades in full compliance with the aesthetic and philological interpretation of the work. 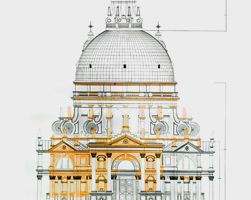 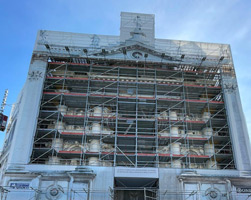 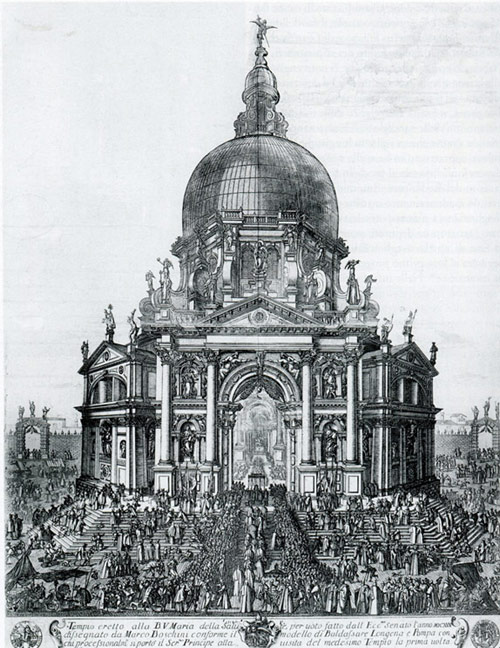 The design and construction of the Church was entrusted to Baldassare Longhena, an architect who was a pupil of Andrea Palladio and who was inspired by his style. Longhena fulfilled the dream of Palladio of building a Church with a circular plan, something completely revolutionary for that time, and put together his teachings (Villa La Rotonda in Vicenza) with the ones of Scamozzi (Villa “Rocca Pisana” with a circular base in Lonigo) and the ones of Sansovino, enriching the work according to the fashion of that time, the Baroque, which provided for an impressive splendor to the building.

The Church, with an octagonal plan, is covered with white limestone and ends with a characteristic double dome, a clear reference to the Rosary. The outside part is distinguished by a range of sculptures that, as in the inside, recall the theme of the glorification of Mary. The facades have a rich and majestic appearance, full of solids and voids, with alternation of well-contrasted masses. The most surprising touch is given by the buttresses that surround the octagonal tambour: powerful volutes that also act as a sculptural base for the other statues that surmount them.

When entering you can understand the originality of the centralized space in all its strength, underlined by the geometrical design of the polychrome marble flooring and by the six lateral chapels illuminated by several windows. The main altar which depicts the Virgin and Child was designed by Longhena and sculpted by Giusto Le Court, the artist who also created some of the outside statues. Inside the altar there is a byzantine icon which gives the name to the Church. A very refined masterpiece of linear sculpture can be seen in the choir, while in the main sacristy there are different paintings of Tiziano, Luca Giordano and Tintoretto. In December 1921, Pope Benedict XV promoted the structure to the rank of Minor Basilica.